With new consoles on the market, and plans to move to San Francisco later this year, I figured it was time to cut down on some of the console clutter I’ve collected over the years. For now, I still have our 360 and PS3, but I’ve traded in a bunch of 360 games, given the Wii to my parents, and sold our long-disused PS2 and all our old PS2 and GameCube games. I’ve also sold off a bunch of DS and GBA games, and my DS Lite and GBA SP consoles themselves won’t be far behind.

Thankfully, if I ever get nostalgic, those systems I’ve retired — the PS2, GameCube, Wii, DS, and GBA — can all be emulated. In my last post I talked about using Dolphin to emulate the GameCube and Wii; for the PS2, there’s PCSX2, which like Dolphin can render games at high resolutions to improve quality; for the DS, there’s DeSmuME (and an excellent Android port of it, called DraStic); and for the GBA, there’s VBA-M. 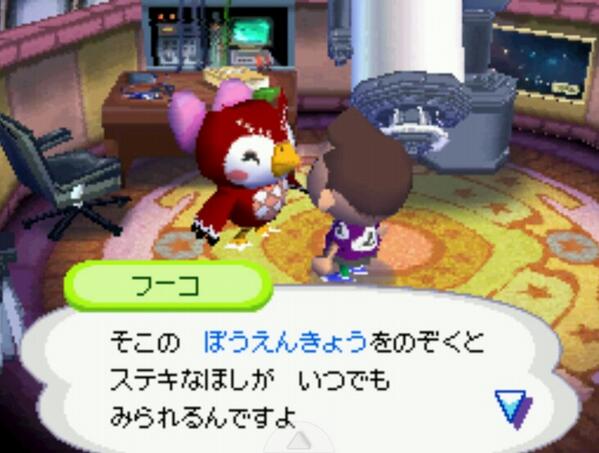 For the Wii, GameCube, and PS2, I was even able to back up my save games, using GCMM and Savegame Manager GX on the Wii for the GameCube and Wii saves, respectively, and uLaunchElf on the PS2, to dump the saves to a USB stick. In both cases, I had to pull some tricks to run third-party code — on the Wii, installing the Homebrew Channel is fairly straightforward, but on the PS2 I had to use my Swap Magic discs.

New console launches are usually a cause for excitement, but their release just reminds me of what we’re losing with the end of the previous generation. Consoles have come and gone in the past, of course, but the move to digital distribution has made separating the consoles from their content much more difficult this time around. If I sold my 360 or PS3 today, I couldn’t resell all their digital content; I still own that content, and if I bought a new 360 in a few years I could reinstall it, but what about 5 years from now, or 10?

Even if it’s not perfect, the PC does offer a better alternative. Some old games are unplayable today, but if a game has a dedicated community, chances are that someone’s worked out how to run it on modern PCs. Steam’s DRM has so far proven mostly benign, and services like GOG and the Humble Store offer DRM-free downloads, too. 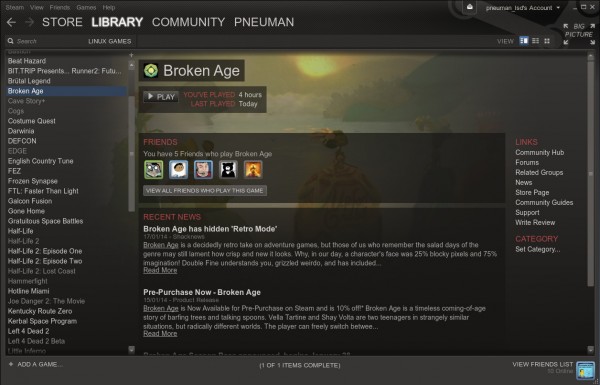 With dozens of great games on Steam, using Linux for PC gaming has never been more viable

In fact, I seem to have made the jump to PC already, almost by accident. I’ve played a couple of big-name games this year, like Bioshock Infinite and Tomb Raider, but I’ve spent much more time playing smaller, more interesting games, like Kerbal Space Program, Gone Home, The Stanley Parable, Brothers: A Tale of Two Sons, Kentucky Route Zero, Papers, Please, and most recently, the Double Fine Adventure game, Broken Age, almost all of which are PC exclusives.

PC gaming has a lot of baggage — the image of the hardcore gamer that spends as much time upgrading and tweaking their Windows PC as they spend actually playing games on it — but these smaller games often defy that image. Most run on Linux and Mac OS X, and most also run on fairly modest PCs; in fact, I’ve spent more time gaming on my now 2011 Macbook Air in the last year than I have on any other system.

I’m sure I’ll want to play another big-budget graphical powerhouse eventually, and I’m not yet sure what I’ll do about that. By that time, a gaming PC with the power of the next-gen consoles might only cost as much as those consoles cost now. I like the idea of gaming laptops, but they’re expensive and clunky; only the Razer Blade delivers suitable power in a sleek, elegant form-factor, but at US$2000 it’s even more expensive than other laptops.

The draw of the familiar can be a funny thing; I don’t often replay games, but sometimes, after enough time has passed, all it can take is a brief mention somewhere to bring back a wave of fond memories, and the desire to relive them. Over the last few weeks, I’ve been doing exactly that, replaying two games that, beyond my nostalgia for them, couldn’t be more dissimilar: Alan Wake and Super Mario Sunshine.

With Alan Wake, all it took to get me playing again was a series of bargain sales of the PC version. My first time through was on the 360, with a borrowed copy, but it was always a game I wanted to revisit, both to play through the two DLC episodes, and to play it after having read Rob Zacny’s fascinating analysis of the game’s events.

I totally get people that don’t like it; the gameplay, while neat in parts, gets a bit repetitive, and the story walks a fine line between cleverness and being entirely up its own ass (a games writer writing a game about a writer who writes about writing a book?). That story really works for me, though — it starts with a bang, and the episodic pacing keeps the story moving brilliantly, with little goals and revelations that gradually reveal the key details about the game’s setting and events. 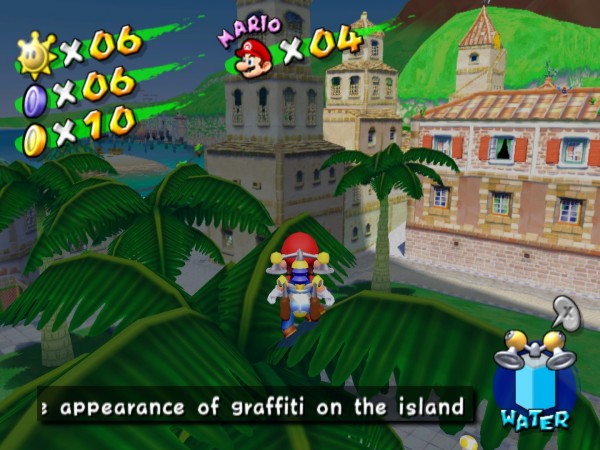 Super Mario Sunshine was always a strange Mario game, but that made it no less fun

In comparison, the story in Super Mario Sunshiney couldn’t be more tedious, but once you get past the dreadful unskippable cut-scenes in its first few hours, it’s a joy to play. The tropical-themed Sunshine wasn’t what people expected after the groundbreaking Super Mario 64, and after being followed on the Wii by the incredibly inventive Super Mario Galaxy, I’d just about forgotten the great fun I had with it until reading Eurogamer’s recent Sunshine retrospective.

That article made me realise what it was that made Sunshine so different — that it takes place in a world that’s not designed precisely around Mario’s capabilities. Instead, it challenges the player to use their skills and Mario’s water-powered hover-pack to explore a more organic world. That’s never more apparent than in Delfino Plaza, the game’s hub world, which you can easily spend hours exploring in search of those elusive Shines.

Oddly enough, I’ve been playing through Sunshine on PC, too, using Dolphin, an open-source, cross-platform GameCube and Wii emulator that improves upon the real hardware by rendering games at high resolutions. While rendering GameCube and Wii games at 1080p with anti-aliasing isn’t enough to make them comparable to more modern consoles, it really does help, especially with the clean, stylised graphics featured in most of Nintendo’s first-party titles. 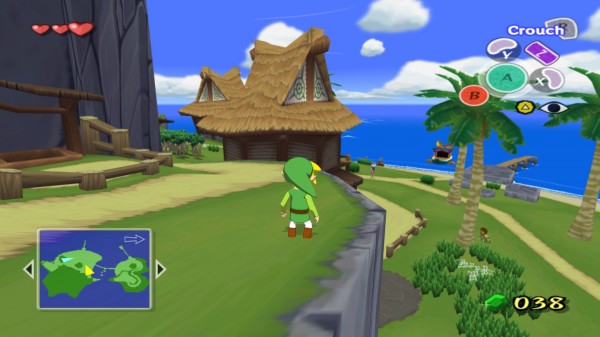 At 1080p, and with the widescreen hack in effect, The Wind Waker could almost pass for a current-generation game

Sunshine at 1080p really does look quite nice, but it’s nothing compared to The Legend of Zelda: The Wind Waker — I don’t think Nintendo will have to change much with its HD remake of the game for Wii U, since with a couple of million extra pixels it already looks remarkably close to a current-generation game. The thing that ages it most is the lack of a widescreen mode, but Dolphin actually has a hack that adds widescreen support to many games, Wind Waker included.

The catch with Dolphin is that it requires a reasonably powerful PC. It doesn’t need the latest video card — my 8800GT is perfectly fine — but it does need a decent CPU, and it’s there that my Athlon II X2, overclocked to 3.58Ghz, is barely enough for many games. Wii games seem to suffer the most, perhaps unsurprisingly; Zelda: Skyward Sword is just a bit too slow to be playable on my PC, and from all reports, Super Mario Galaxy and its sequel don’t run smoothly on anything less than the fastest PCs available. 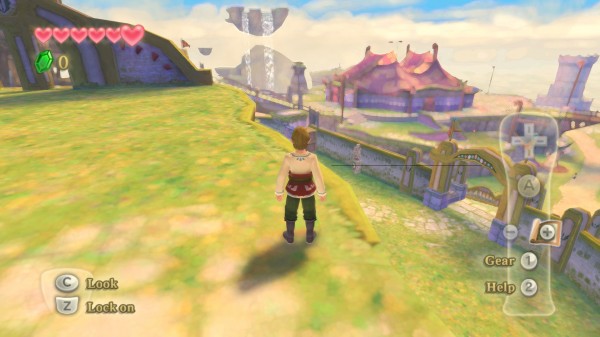 With a real Wii Remote connected via Bluetooth, even MotionPlus-heavy games like Zelda: Skyward Sword are playable in Dolphin

For Sunshine, I’ve been using a 360 controller along with a $10 Xbox wireless receiver from DealExtreme, and the xboxdrv user-space Xbox controller driver; with its analog triggers and the very GameCube-esque controller layout in general, it’s a great fit. For Wii games, Dolphin can emulate a Wiimote of sorts, but it’s much easier to use a real Wiimote via Bluetooth.

Few games have had as powerful a combination of sight, sound, and action as Rez, Tetsuya Mizuguchi’s music-driven shooter, so when Mizuguchi demonstrated its spiritual successor at last year’s E3, I was sold on it instantly. Child of Eden plays much like a Rez sequel, but with its Kinect controls, it feels like a very different experience.

It’s a very pretty game, of course, and with a controller that would probably be about the end of it, but the Kinect controls not only work well, but they feel great. You sweep across the screen with your right hand to target groups of enemies, and then push your hand forward to fire; there’s also a rapid-fire attack that you can target with your left hand. Firing in time with the music gives you a scoring bonus, and with many sequences calling for rapid switches between the two firing modes, you start to feel like some bad-ass Jedi conductor.

Or rather, a bad-ass Jedi conductor that’s tripping balls.

The Kinect controls do suffer from the odd mis-detection, but once you get used to how it works it’s easy to keep them to a minimum. I had the best luck holding my right hand fairly close to my body, giving myself plenty of room to push it forward to fire. I also found it important to keep my inactive hand by my side, to prevent any accidental firing-mode switches. You can play it with a controller, and I’ve no doubt I’d score better that way, but it wouldn’t be as much fun.

Like Rez, Child of Eden isn’t a long game — the main game takes no more than 2-3 hours — but there’s a lot of fun to be had in replaying the levels for higher scores, or just for the experience. However, it does lacks some of the sense of mystery and wonder that came from playing Rez. Playing through Area 5 in Rez is a powerful, chilling, and uplifting experience, and while I’m glad Child of Eden doesn’t try to simply replicate that experience — you can’t go home again, as they say — it does feel like it’s missing some of Rez’s emotional highs.

Despite that, it’s still a brilliant game, and perhaps the best demonstration yet of Kinect’s ability to deliver precise, responsive controls.