This weekend was Ludum Dare again, and again Switchbreak asked me to write some music for his entry. It’s called Underground City Defender, and it’s a HTML5/Javascript game, so you can play it in your browser here!

The original idea for the game was to make it Night Vale-themed, so I started the music with a Disparition vibe in mind. The game didn’t turn out that way in the end, but that’s okay, since the music didn’t either! It’s suitably dark and has a driving beat to it, so I think fits the game pretty well.

My move to San Francisco is just a few weeks away, so I’ve sold most of my studio gear, including my audio interface and keyboard. That left me using my on-board sound card to run JACK and Ardour, but that turned out just fine — with no hardware synths to record from, not having a proper audio interface didn’t slow me down.

As some of you guessed, the toy in the mystery box in my last post was indeed a Teenage Engineering OP-1. It filled in as my MIDI controller here, and while it’s no substitute for a full-sized, velocity-sensitive keyboard, it did a surprisingly good job.

Software-wise, I used Rui’s samplv1 for the kick and snare drums, which worked brilliantly. I created separate tracks for the kick and snare, and added samplv1 to each, loading appropriate samples and then tweaking samplv1’s filters and envelopes to get the sound I was after. In the past I’ve used Hydrogen and created custom drum kits when I needed to make these sorts of tweaks, but having the same features (and more!) in a plugin within Ardour is definitely more convenient.

The other plugins probably aren’t surprising — Pianoteq for the pianos, Loomer Aspect for everything else — and of course, it was sequenced in Ardour 3. Ardour was a bit crashy for me in this session; I don’t know if it was because of my hasty JACK setup, or some issues in Ardour’s current Git code, but I’ll see if I can narrow it down.

This weekend was Ludum Dare 26, and as usual when Switchbreak enters such things, I took the opportunity to tag along. The theme was “minimalism”, but his game, called MinimaLand, deliberately eschews that theme; it tasks the player with bringing life and detail in to a very minimalist world. 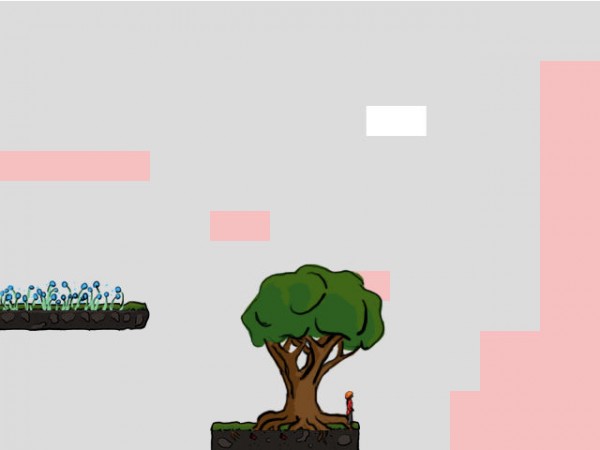 In MinimaLand, the player brings life to an abstract, minimalist world

I wasn’t sure at first how to fit music to the game, but it soon became clear: if I was going anti-minimalist, I wanted to use an orchestra. Ever since I heard about the Sonatina Symphonic Orchestra, a CC-licenced orchestral sample set, I’ve wanted to try recording something with it; what better time to try it than with a deadline looming!

Given that I had just a few hours for this, I kept the music itself very simple — just three chords and a short melody. The music itself is almost irrelevant in this case, though, since it’s really just a means of delivering those orchestral sounds to the player. Initially, the melody and harmony are on strings, with rhythmic staccato stabs on brass, then the whole thing repeats, with the stabs moving to strings and the melody/harmony to woodwinds and horns.

It’s funny that, even when I’m dealing with sampled instruments instead of my own synth sounds, I still think in terms of sound and feel first, and chords and melodies second. I guess that’s just how I roll! 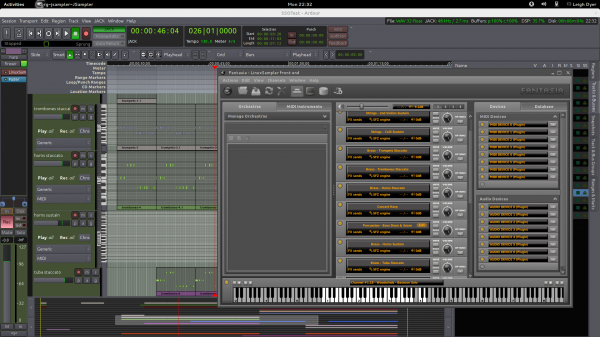 That’s a lot of LinuxSampler channels!

Not unexpectedly, I sequenced everything in Ardour 3 and hosted the SSO instruments, which are in SFZ format, in LinuxSampler, using a LinuxSampler build from a recent SVN checkout. I didn’t use anything else on this one, not even any plugins, since all it really needed was some reverb and the SSO samples already have plenty of it.

Recent versions of LinuxSampler’s LV2 plugin expose 32 channels of audio output; I guess the idea behind this is to allow you to run multiple instruments to dedicated outputs from within a single plugin instance, but I’m not sure why anyone would actually want to do that. I think my workflow, with each instrument in its own plugin instance on its own track, makes a lot more sense, so I patched the plugin to return it to a simple stereo output per instance.

I’ve been keen to try SSO mostly to see just how usable it is, and in this case, I think it worked pretty well. With just 500MB of samples, it’s never going to sound as good as a commercial library (where individual instruments can take several GB), but some of the samples, such as the string ensembles, sound quite nice at first listen.

The biggest problem is with the availability of different articulations for each instrument. You do get staccato samples for most instruments, and pizzicato for the strings, but beyond that you just get “sustain” sounds, which are great for held notes (as long as the sample’s long enough), but far less suitable for faster legato parts. You can hear this in the horn part in the second half of the track, where some short notes take so long to start playing that they barely become audible before they end.

Many of the solo instruments are quite weak, too — you can hear audible jumps between certain notes in several of them, where the instrument jumps from one discrete sample to the next, while others have odd tuning problems.

There’s also a tonne of reverb on every instrument. SSO’s instrument samples come from a variety of sources, so each instrument has its own reverb characteristics; in an attempt to even out the differences and make them all sound at least vaguely like they’re in the same room, the library’s creator added quite a bit of extra reverb to each instrument. It’s a necessary evil, and it works, but it has a smearing effect that only exacerbates those problems with short notes.

So, SSO was well suited to this track — most notes were either staccato/pizzicato or were held for quite some time, I didn’t need to use any solo instruments, and the wall of reverb helped make it sound suitably pompous. If your needs are different, though, then you’ll have a hard time getting good results from it.

Having said that, it is far-and-away the best free option, and it’s also quite easy to get working under Linux, which can’t be said for many commercial libraries. Despite my mostly good experience with it, though, I’m keen to investigate just what commercial alternatives are available that will work under Linux.