I’ve spent the last week working on a game for the Seven Day Roguelike Challenge with Switchbreak and Amanda Lange, and by virtue of the fact that it’s a seven-day project, it’s now finished! It’s called Cosplay Mystery Dungeon, and you can play it here (if you have Flash installed). 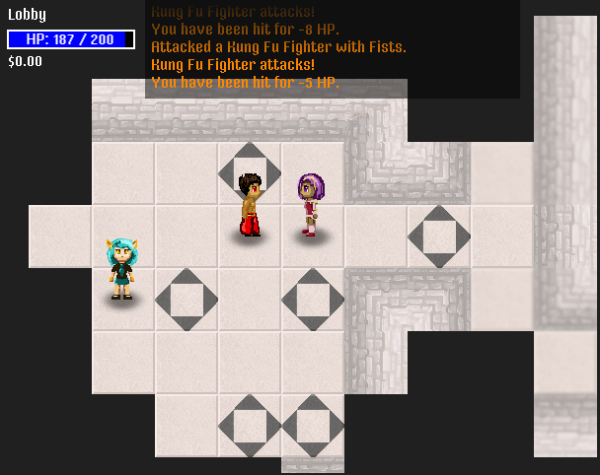 A week isn’t long, but I’m really impressed with the finished game — Amanda did great work on the art and the game design, and Switchbreak put a tonne of work in to the code. Here’s how my part of it all came together.

Getting in with the right crowd

@second_truth Hey, if you don’t find any tools to your liking I’d be willing to code your design – is 7DRL cool with collaboration?

Once Switchbreak was involved, it wasn’t long before I jumped on board, too. Amanda came up with the concept and had written up a lot of notes about the design, so I had a good idea of what sounds would be needed, and what they should sound like, from the get-go.

Early in the week, I worked on the basic player and weapon sounds, making a few versions of most of the weapon sounds to avoid any annoying reptition. The magic effects came later; Amanda’s design included various spells, in the form of collectable comic books, but with the deadline looming I wasn’t sure which of those would make it in to the game. As it turned out, Switchbreak managed to implement them all in the closing hours, so my last hour-or-so was a race to create the matching sounds.

The sounds were a mix of synthesis (using both my Blofeld and Loomer Aspect) and recorded sounds. Some used both synthesis and recording, in fact, such as the lightsaber — after reading about how the sound was created originally, I created a suitable humming sound, played it through one of my monitors, and then swung my mic back and forth past the speaker, recording the results.

Music in a hurry

I hadn’t planned to write music for the game, but it felt so odd without it that, with less than a day left, I decided to take a stab at writing something. I’ve written short pieces within hours for past Switchbreak games, but they’ve been much smaller than this. A run-through of Cosplay Mystery Dungeon can take an hour or more, not to mention the time spent on unsuccessful attempts, so the music needed enough length and variety to carry it over a longer playtime.

I started with the bass line and fast-paced drums, and I knew from the start that I wanted to add a later section with slower, glitchy drums, so those went in early, too. Soon after I nailed down the chord progressions and structure, and started filling in the melody, pad, and stabby brass lines.

This is what an all-MIDI, all-softsynth Ardour session looks like

As with my RPM Challenge work, I worked quickly by sticking with MIDI (no bouncing to audio), using softsynths instead of hardware, and mixing on-the-fly, with minimal (or none, in this case) EQ and compression. Synths do let you cheat a bit — if you find that a part is too bright or too dull, or needs more or less sustain, you can just edit the synth patch (tweaking filters and envelopes, for example) instead of using EQ and compression to fix those things after the fact. You can’t solve every mix issue that way, but I find that I can get a perfectly decent, listenable mix that way more quickly than I could otherwise.

All up, I think the music took about 5-6 hours to record, with another half-hour or so after that creating musical cues for the endgame screen and the game over screen, using the same instruments. That left me with just enough time to finish the magic sound effects before the deadline.

Loomer Aspect and Sequent earned their keep, alongside open-source plugins like Invada Tube and the TAL and Calf delays

Loomer Aspect really paid for itself on this one. I used TAL NoiseMaker on the chorus lead sound (it’s a modified preset), and the Salamander Drumkit with the LinuxSampler plugin for the drums, but every other sound came from Aspect, mostly using patches that I created on-the-fly. For such a capable synth, it’s surprisingly easy to program — everything’s laid out in front of you, and it’s fairly easy to follow. It lacks the Blofeld’s distortion options, but using distortion plugins in Ardour (TAP TubeWarmth and Invada Tube Distortion) helped address that.

I also had an excuse to use Loomer Sequent — it provided the glitch effects on the drums in the slower section. The presets were all a bit too random to be usable on such sparse parts, so I edited the effects sequence in Sequent to match the parts, adding just a bit of randomness to its loop-slicing parameters.

This was the first track I’d recorded since the official release of Ardour 3, too. It worked really well — it was stable, reliable, and predictable throughout, a definite improvement on the betas. If you haven’t tried it yet, now’s definitely the time!