Things have been quiet here of late, but I’ve actually been quite busy! I’ve just finished the sound design for Candy Grapple, the latest game from my good friend Switchbreak. It’s based on one of his Ludum Dare games, Waterfall Rescue, but it’s been fleshed out in to a full game, with much more complete gameplay, many more levels, and a spooky Halloween theme. It’s out now for Android, and there’s an iOS version on the way, too.

Switchbreak asked me to make some suitably spooky-cheesy music for it, and I happily agreed; once I started working on that, I realised he’d also need sound effects, so I offered to create those, too. Read on for details!

The bulk of my time went in to the in-game background music. Halloween music was new territory for me, but my mind went straight to The Simpsons Halloween specials, and the harpsichord and theremin closing credits. I thought about other “spooky” instruments and came up with the organ, and while it’s not spooky as such, the tuba seemed suitably ridiculous for the kooky carnival sound I was after.

I didn’t want to over-use the theremin, so I stuck with organ for the melody for the most part, and saved the theremin for the bridge, where the harpsichord and tuba drop away in favour of some organ triplets and piano bass notes.

A standard drum kit didn’t seem like a good fit (with that bouncy tuba part, it was in danger of becoming a polka), so I stuck with more random, wacky bits of percussion, like castanets and a vibraslap. I did use some cymbal rolls and crashes in the bridge, though.

Now, for the instruments: I used Pianoteq for the harpsichord and piano, as you’d probably expect; the percussion sounds were from the Sonatina Symphonic Orchestra, played using the LinuxSampler plugin; and the theremin was a simple patch on the Blofeld. 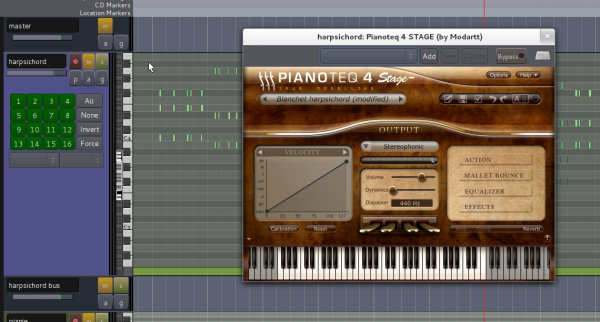 The tuba and organ, surprisingly, come from the Fluid GM soundfont. I’m not usually a fan of instruments from GM sets, and I did try a few alternatives, but the Fluid sounds were very well-behaved and sat well in the mix, so I didn’t let myself get hung up on where they came from.

Faking the theremin was fairly straightforward — it’s just a single sine-wave oscillator, but with some portamento to slur the pitch changes and an LFO routed to the oscillator pitch to add vibrato, both of which make that sine wave sound suitably theremin-ish.
I used TAL NoiseMaker at first, but switched to the Blofeld so I could use the modwheel to alter the amount of vibrato (the Blofeld’s modulation matrix makes this sort of thing easy); in hindsight, it would’ve been just as easy to stick with NoiseMaker and alter the vibrato by automating the LFO depth.

The mix came together fairly quickly. There’s a bunch of reverb (I had trouble getting the IR plugin working, so I used TAP Reverberator instead), a little EQ on the tuba and organ to brighten them a bit, and some compression on the piano to add sustain, but that’s about it as far as effects go. The only tricky part was making sure the transition in to the bridge wasn’t too abrupt, but all that really required was some careful balancing of levels.

It was, of course, all recorded and mixed in Ardour 3 — it has an annoying MIDI monitoring bug right now, but I’m hoping that’ll be fixed soon.

I wanted to add some music to the title screen, too, so I come up with a little organ fanfare-ish thing and recorded it in to Ardour. The organ is the setBfree plugin, a Hammond B3 emulation based on an old app called Beatrix.

Beatrix had taken on near-legendary status in Linux audio circles, partly due to its great sound, and partly due to being near-impossible to run. It lacked JACK support and had various other issues, and its strict licencing forbid forking it or distributing patched versions.

Somehow, though, the setBfree devs managed to negotiate a suitable licence, and have added JACK support, LV2 plugin support, and a basic GUI. The GUI is a separate app that talks to the synth engine (whether it’s the JACK app or the LV2 plugin) via MIDI; it lets you configure the organ stops manually, or load presets. 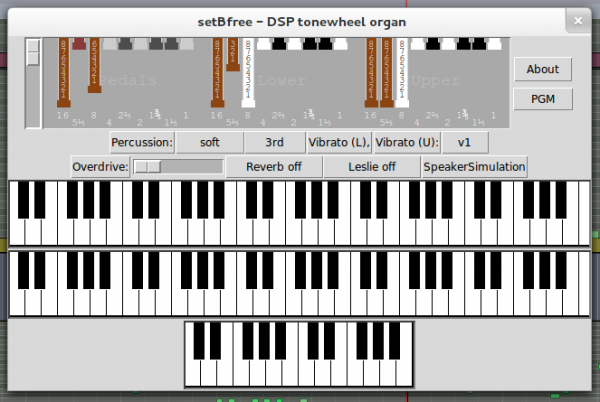 The thunder sound was my own recording — I have a habit of setting up my Zoom H1 and letting it record during thunderstorms, and that’s finally come in handy!

Sound effects are hard; I’ve had a little experience with this, working on another game for Switchbreak which is still in development, but it’s all still fairly new to me. I used synths for some — Pianoteq came in handy once again here, for its tubular and church bells — but the rest were recorded sounds, mostly of me using things to hit other things. For the flapping bat wings, for instance, I slapped rubber gloves together, and idea I saw on this list of sound effects techniques.

I’m pretty happy with the fact that there are two vocal samples in there, too — the ghost and the witch are both me. The witch’s cackle just took some pitch shifting and a bunch of reverb. 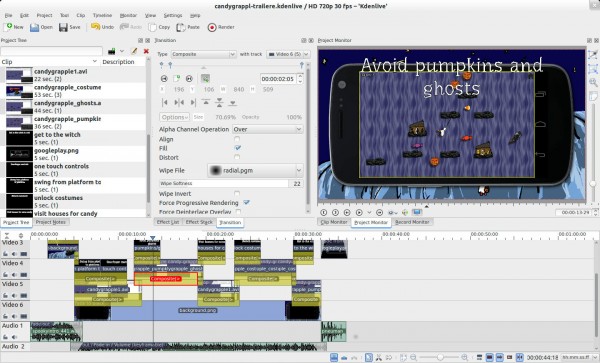 As the game neared completion we realised it’d need a trailer, so I volunteered to make one, using Kdenlive. I used ffmpeg to record video from the Flash version of the game, then brought that in to Kdenlive, where I composited it on top of the phone image and background. It was a fairly straightforward edit, but I had some fun with it — I hadn’t played with wipes before now, for instance, so I took the opportunity to ham it up and throw some in.