The last week has seen the announcement of two new LV2 synths, both from Qtractor and QJackCtl developer and all ’round good-guy Rui Nuno Capela: synthv1 and samplv1. Both are in the early stages of development, but they’re already looking very promising. 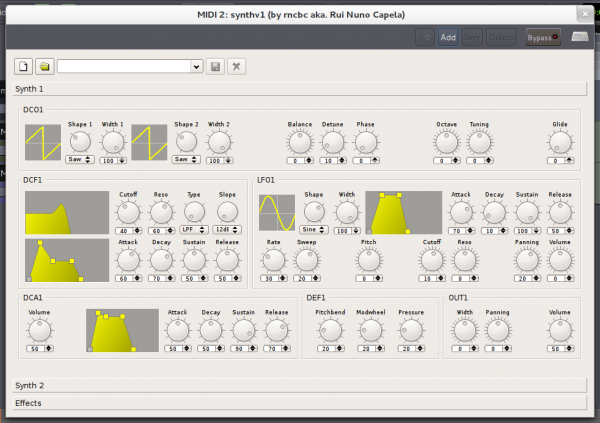 synthv1 is a classic analogue-style synth with a few twists

You can never have enough good analogue-style soft-synths, and synthv1 is a welcome addition to the list. The basic synth design is pretty straightforward — two oscillators (with saw, pulse, sine, and noise waves), a multi-mode filter with its own envelope, and an LFO with various routing options. However, each patch actually has two instances of this synth engine, which are mixed and then processed through an effects section.

This layered design is particularly handy for adding sub-octaves to create strong bass sounds, or adding some high-end sizzle to pads, especially when combined with the filter’s high-pass mode and the LFO’s panning control. It can also create very wide stereo sounds, by building subtly different sounds on each layer and then panning the layers in opposite directions.

There are some other unique touches, too. For instance, the saw wave is actually continually variable between saw and triangle modes, which gives you more basic oscillator timbres to work with; hopefully later versions will allow the LFO to be routed to this wave shape control, both for saw/triangle variation and for pulse width variation. Also, the LFO has its own envelope, which can be used to adding vibrato or filter cutoff variation to a sound after the initial attack, for instance. 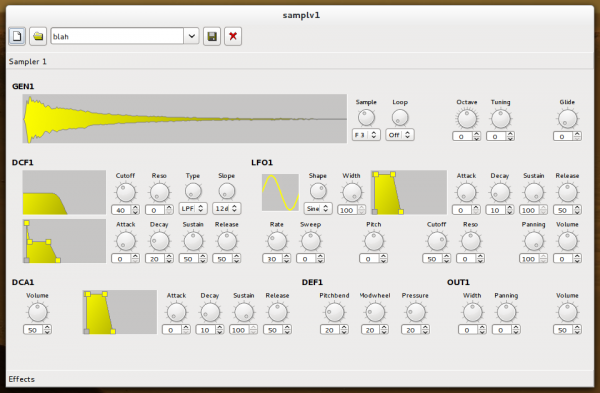 samplv1 is the more interesting for me, though, because it fills what I feel is a major gap in Linux audio: a simple plugin sampler. LinuxSampler is great, and it’s available as a plugin, but sometimes you just want to take a single sample and do something creative with it, especially when making percussion parts, and LinuxSampler doesn’t make that easy. Specimen (for which I recorded a video tutorial) is a better option for this, but as a standalone JACK app, it’s cumbersome to use, especially if you’re using multiple instances to host multiple sounds.

In a lot of ways, samplv1 is like a plugin version of Specimen — it lets you load a sample and map it to your keyboard within seconds, and then optionally use other synth components to process that sound. samplv1 uses the same envelope-controlled multi-mode filter and LFO as synthv1, which gives you a lot of scope for creative sound design; Specimen has a bit more modulation flexibility, but it’s not as immediately accessible as samplv1 is. samplev1 also shares synthv1’s stereo effects section.

It’s still early days for both of these, so don’t be too surprised if you run in to problems (I’ve had a few crashes with Ardour 3, for instance, but I haven’t narrowed down their cause yet), but they’re definitely worth checking out!