“The Lagrange points are the five positions in an orbital configuration where a small object affected only by gravity can theoretically be stationary relative to two larger objects (such as a satellite with respect to the Earth and Moon).”

Though it’s a close-run competition with hohmann, I think this was the fastest of all the tracks to record — I sat down on day 11 and within a couple of hours, it was finished. This was really just an excuse to play with Argotlunar, a real-time granular processor that runs as a native VST plugin. While Loomer Cumulus works on pre-recorded samples, Argotlunar works in real-time on whatever audio you run through it, so it’s great for adding glitchy, cloudy, distorted granular effects to instruments.

In this case, I created a suitable pad sound using TAL NoiseMaker, recorded some improvised chords in to Ardour, and then tweaked Argotlunar’s settings to see what effects I could produce. Most of the time I spent working on this track was in automating Argotlunar’s settings, shifting through different ranges of settings to create different effects. I also added a Calf Vintage Delay, mainly toward the end, to give things a little more space. 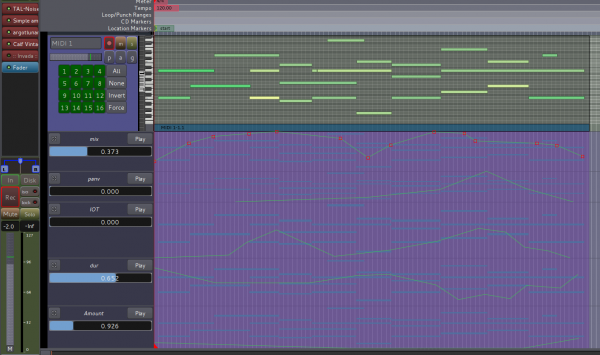 There’s not a lot more to say about this; it’s a simple track, but it does its job. Argotlunar was great fun to play with, and it creates some interesting sounds, but I don’t think there’s quite enough variation on it to really justify its length — it could easily be a minute shorter without losing anything. It does at least work well as a change of pace before heading in to escape velocity.