This started as a quick experiment at the end of day 3 — taking a recording of Pianoteq’s tubular bells instrument and running it through Loomer Cumulus, a granular synth that lets you vary the pitch and playback speed of a sample, among other things. Playing it slowly through Cumulus revealed some really nice textures, so on day 4 I recorded the output in to Ardour and started arranging it in to a track. By the end of day 4, it was done. 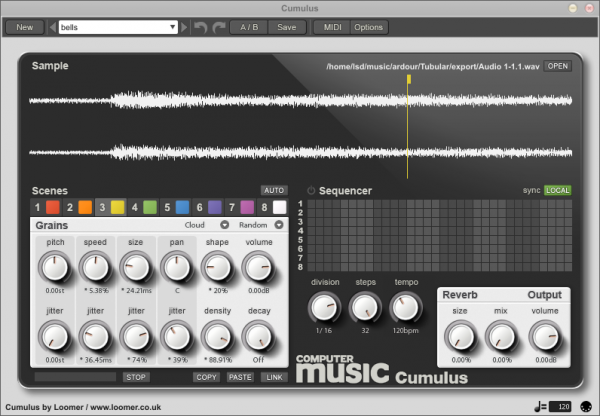 To flesh things out, I added a piano sound (Pianoteq again), which I recorded, stretched, chopped up, and then ran through some distortions and a compressor, and then a pulsating bass part from the Blofeld. I doubled up the tubular bells part, too, stretching and pitch-shifting it and adding a rotary speaker plugin, which makes it sound almost string-like. TAP TubeWarmth adds a touch of distortion; I automated the drive level to add varying amounts of distortion to different sections.

This track is more of an audio collage than a sequenced track, so unlike the other tracks on the album, there aren’t any MIDI parts. The synth parts were all played live and recorded straight in as audio. I’m really happy with how it turned out — it has some interesting sounds and textures, and a bit of progression. It’s definitely one of my favourite tracks on the album.