This track was the perfect bookend for this project: I started it way back on day 3, but it was the very last track I finished, on day 28. It was also a real problem child — the descending bassline motif was there from the start, but despite several attempts I just couldn’t work out how to develop it in to a complete track. It also didn’t seem to fit in with anything else on the album, so even though I really liked the initial idea, I wasn’t sure it’d make it on to the album.

Inspiration struck when I decided that it could work as the closing track of the album, a little mood piece to leave things on that bittersweet note that I seem to love so much. With that decision made, everything else fell in to place: it didn’t have to be long, and I could use vinyl-like effects to make it sound overly vintage, which somehow has the effect of making a lonely piece of music sound even more lonely.

Once I’d decided on that direction, there was only one name I could ever give to this track. Buzz Aldrin’s first words on the Moon aren’t as famous as Neil Armstrong’s, of course, but I’ve always found them far more poignant — they so succinctly express how strange it must’ve felt to look out across a landscape that’s simultaneously full of beautiful and devoid of life.

The piano recording was a live improvisation based upon that descending bassline, which I cleaned up a little in Ardour after the fact; the piano was of course Pianoteq, running in to a convolution reverb (using the IR LV2 plugin). For the vinyl sound, I tried the VyNil plugin, and it did make things sound suitably vintage, but the vinyl surface noise was essentially white noise with random pops, and I wanted more a cyclic popping sound, like you’d get when a needle hits the same scratches on each revolution.

Instead, I used an EQ to kill the highs and the lows, which instantly makes something sound old-timey, and then added a vinyl noise sample from Freesound, which I looped for the length of the track. Adding just a little vibrato (using TAP Vibrato) to simulate the sound of a slightly warped record helped to complete the vintage feel. 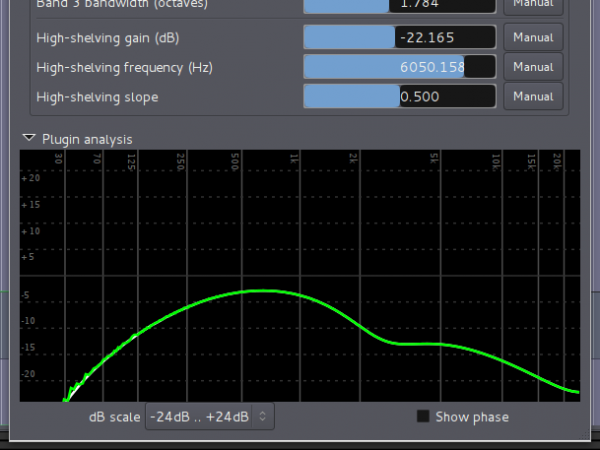 Cutting away high and low frequencies, as shown in this plugin frequency response graph, goes a long way to making something sound "old"

Fading between the “vinyl” piano and the unprocessed piano was more tricky than I initially expected. The idea was simple enough: I disconnected the piano track from the master bus and routed it in to two new buses — one with the EQ and vibrato plugins, and one without — and then faded each bus in and out as required. I used automation to disable the vibrato (moving its “depth” to 0%) to prevent chorusing effects while both the “old” and “new” buses were playing mid-fade, but even so, the fades didn’t sound right.

As it turns out, the TAP Vibrato plugin adds latency as part of its processing, so the “old” piano bus was tens of milliseconds behind the “new” piano bus, causing an echoing effect instead of a smooth transition from one sound to the other. The solution was easy, once it occurred to me: I moved the vibrato to the piano track itself, so its latency affected both buses equally, and then used automation to set its depth to 0% during the “new” parts of the song.

It’s worth mentioning that Ardour does compensate automatically for plugin latency on audio tracks. If I’d recorded the piano to audio, and then copied and pasted it across two audio tracks instead of using buses, then these issues wouldn’t occur, assuming that the plugin advertises its latency correctly.

I wish I could’ve done a better job of the actual piano arrangement in this — it needs to be properly composed and written down, and then handed to someone with more skill on the keyboard than me — but I’m really happy with its overall feel, and the impression that it leaves me with every time I hear it at the end of the album. A good final track can really help an album make a mark on people, and I think this track manages that.