The standard rocket parts include all the things you’d expect: liquid fuel tanks and rocket engines, strap-on solid boosters, stage separators, tail fins, support struts, and of course the command module, with add-on parachute, which houses your Kerbal astronauts. Like their real-life counterparts, solid boosters have a lot of thrust but they burn out quickly and can’t be shut down once started, while liquid engines are less powerful but burn longer, and can be shut down or throttled mid-flight. 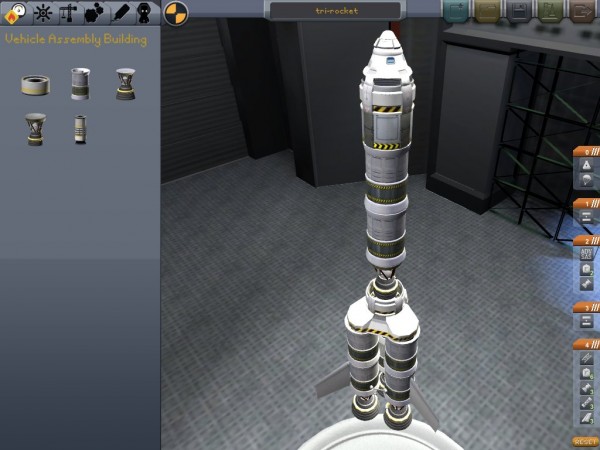 The Vehicle Assembly Building, where you design your rockets

Simple rockets are quite easy to put together, but more complex rockets require a lot more thought, since you can (and really have to) customise the staging sequence for your rocket, determining when each engine lights and when each stage separator fires. Larger rockets also need control systems, like RCS thrusters and the ASAS flight control computer, to keep them from veering off course.

Once you’ve built your rocket, it’s time to launch it, and if you’ve built it properly, it might even get off the ground! Again, with simple rockets, it’s not hard to get something off the ground and flying upward in a straight line, but as your rockets get larger and more complex, the challenge of building a working rocket increases dramatically. 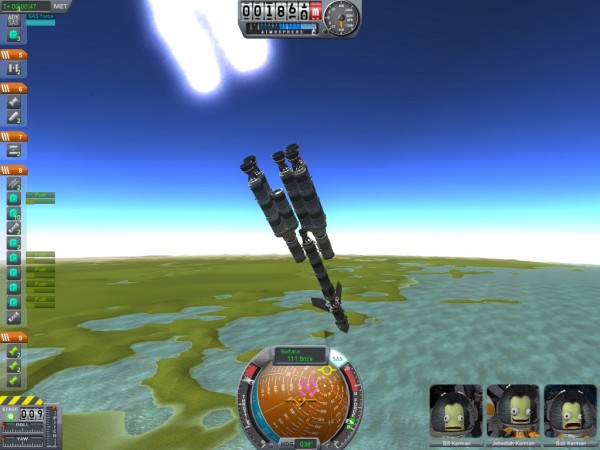 This one may not be going in the right direction...

Failure can be frustrating, but it’s also hilarious. Rockets can veer off-course wildly, encounter control oscillations so bad that they tear themselves apart, suffer from disastrous separation mishaps, or just sit on the pad due to a shortfall of thrust until they topple over or explode. You might feel bad about dooming so many Kerbal astronauts, but watching a failure play out entirely beyond your control in KSP is just as entertaining as it is in games like Lemmings or World of Goo. 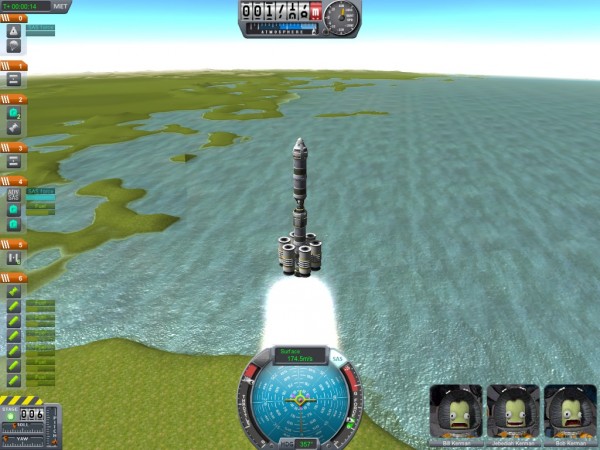 With two liquid-fuelled stages and six strap-on solid boosters, this rocket has plenty of power to reach orbit

One of the great things about KSP is the way it demonstrates the principles of real spaceflight. People may wonder why NASA spends billions sending astronauts in to space while companies like Virgin can do it for hundreds of thousands of dollars, but KSP makes the differences very clear. A small rocket will get your Kerbal astronauts straight up to the boundary of space, around 35,000m up, and a slightly larger one will get them out beyond the atmosphere, at about 70,000m.

Getting Your Kerbals in to orbit, though, requires a lot more power — you need to get them up there, and then get them travelling straight across at about 2300m/s, which means getting an entire rocket stage up to orbital height with a lot of fuel left. Perhaps the coolest thing, though, is that getting back down doesn’t require much power at all: you only need a tiny amount of reverse thrust (50m/s is usually plenty) to slow down enough to dip in to the atmosphere, and from there, the atmosphere will slow you all the way down without needing any extra fuel. 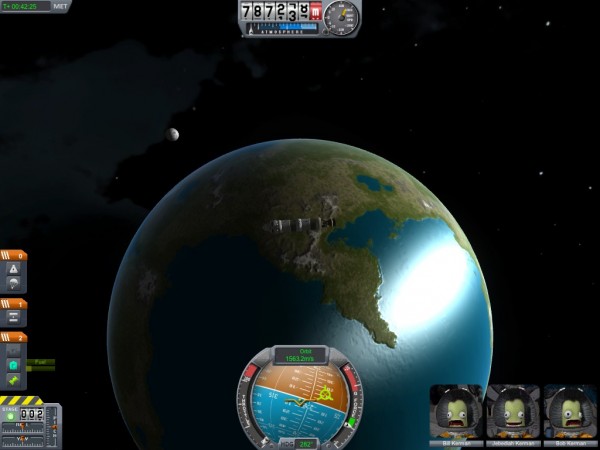 Flying in a high orbit above Kerbin, with Mun in the distance

Earlier versions of KSP required maths skills, or just dumb luck, to get in to orbit: the only way you knew for sure that you’d made it was by waiting until you’d completed an orbit. Current versions include an orbital map, which plots out your current orbit (or your current course back in to the planet) based on your speed and heading. 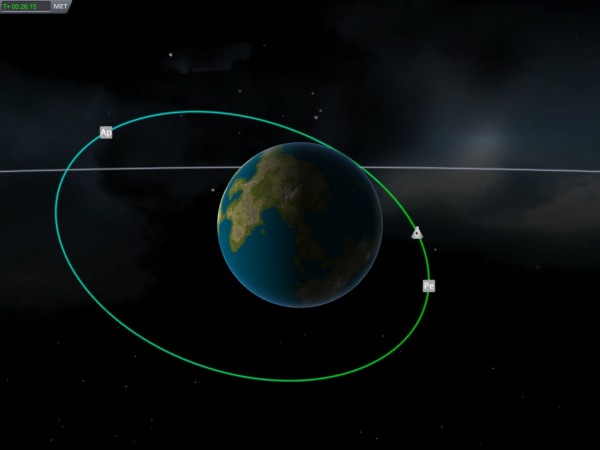 When I started playing KSP, it took me a lot of work just to get in to orbit, but in KSP 0.12 there’s now a much grander target: a moon, called Mun. Getting to Mun requires even more power — you need to get to orbit and then accelerate to about 3000m/s in the right direction — and then slowing in to Munar orbit requires even more thrust. Spaceflight is all about weight, and every bit of extra fuel you need at the end of your flight means a lot more fuel (and often more engines, which adds more weight and requires even more fuel) at launch.

The ultimate challenge is a Mun landing. There’s no landing gear as such, but you can cobble one together with tail fins, though the challenge, as always, comes down to weight: you need fuel to get to Mun, slow to a halt above the surface, make a controlled hover over the surface until you find a suitable landing spot, and then very carefully drop down to the surface. Once you’re there, you still need enough fuel in your spacecraft to take off again, break away from Mun’s gravity, and then head back to Kerbin. 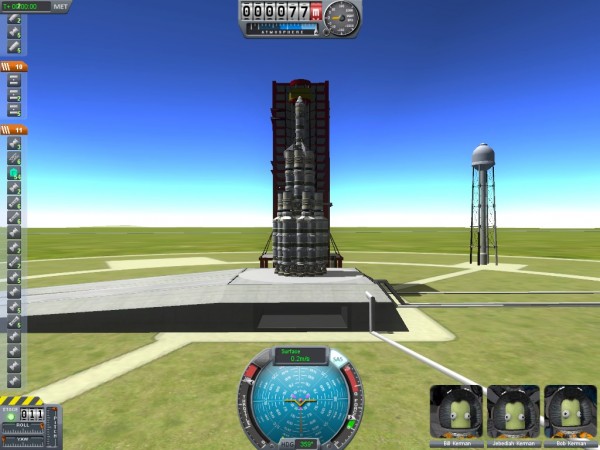 My massive moonshot rocket, sitting on the pad before launch 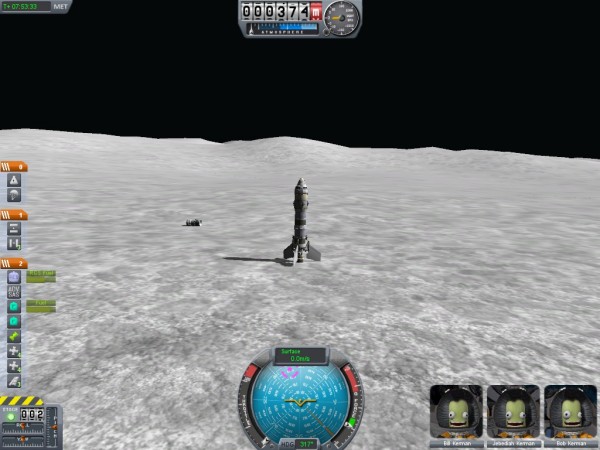 Touchdown! This is all that's left of my giant rocket after reaching the Munar surface

For now, KSP is available only for Windows and Mac OS X; it uses the Unity game engine, which runs on just about every platform other than Linux. The Unity developers apparently plan to add Linux support, but for now, the Windows version runs quite well under Wine. The current version is free, but the developers are going to start charging soon, so now is as good a time as any to check it out!

One thought on “this is my minecraft: kerbal space program”