After a few last-minute tweaks, I’m finally ready to release my new track. The plan is for this to be the first track of an EP that will be available for download from Bandcamp, but I’m sure that won’t happen for several months, so I wanted to post the track here early to give everyone a chance to hear it. It’s a downbeat, ambient techno-kinda thing I call “Texel”:

I talked a little about the production in an earlier post, but I have included some further details after the jump.
END_OF_DOCUMENT_TOKEN_TO_BE_REPLACED

I’ve mentioned Mixing Secrets for the Small Studio a couple of times now — it’s a great read, and I’m learning a lot from it, but mixing is just a part of making great music. Finding inspiration, getting ideas down, and then developing those ideas in to complete tracks are the real challenges, but there’s some great advice online for doing just that.

It was an article on Create Digital Music that reminded me about those challenges today — it contains seven “tips for creative success”, and they’re all right on the money. They talk about making use of what you have rather than focusing on what you think you need, and the importance of spending time on the music and having fun rather than sweating over tiny bits of finesse that no-one will notice anyway.

Some of the most enlightening posts I’ve ever read about making music come from general fuzz, a producer of some excellent (and free!) downtempo electronica; his “lessons” posts are a fantastic read. Some of his points relate specifically to music, and electronic music in particular, but many of them relate just as well to any other creative pursuit.

He covers a lot of ground: the value of finding your audience rather than relying solely on friends and family for feedback, of waiting before releasing new work rather than pushing it straight out, of actually finishing something, even if it’s not “perfect”, and of not getting disheartened by the fact that no-one will care about your work quite as much as you do.

I think that last point is particularly important. It’s great to make things that others enjoy, and to take joy from that, but if you’re not creating for yourself first, enjoying the process as much as the result, then you’ll ultimately end up frustrated.

A few months ago I posted that I was working on new music using Ardour 3, and I’m glad to say that my new track is now all but finished. Working with Ardour 3 was a bit nervewracking at times, as you’d expect when testing alpha software — there were several times, in fact, when I couldn’t even open the project’s session due to one bug or another. It all held together somehow, though, and after many bug reports and fixes, I definitely feel like it’s helped

The new track is a bit of a downbeat, ambient-ish thing, with some lo-fi sounds mixed in with some glitchy elements. I definitely put Ardour’s MIDI features to the test: there are MIDI tracks running out to my Blofeld and to Hydrogen, along with LV2 synths (Calf Monosynth and Linuxsampler), along with automation of CC parameters on the Blofeld and automation of plugin paramaters on Calf Monosynth. I’ve done quite a bit of effects automation as well, particularly with the bitcrushing Decimator plugin.

There’s even a VST plugin in there now; I had been beta-testing Loomer Cumulus, using it as a standalone synth, but with Ardour’s new VST support I now have it running within Ardour directly. Cumulus is somewhere between a synth and an effect: it lets you load a sample, and then trigger its playback using granular synthesis with varying paramaters, altering the starting point, pitch, and playback rate, among other things. You can define up to eight sets of those parameters, and then trigger those via MIDI keys. It can turn all sorts of sounds in to eerie textures, but it can just as easily take a drum loop and turn it in to a wonderfully glitchy mess, which is exactly what I used it for.

I’m pretty sure the track is done, but I don’t want to release it just yet. I plan to sit on it for a few days at least, while I read more of my copy of Mixing Secrets for the Small Studio, but I like the idea of putting together at least an EP with a couple of other tracks and releasing them all at once. That might not be practical if it takes me four months to finish each track, though, so I may post the individual tracks here when they’re ready, and then do an official Bandcamp release once they’re all done.

Ardour 3.0 is still in alpha, but it gained a substantial new feature last week: support for native Linux VST plugins. It’s a feature that’s been on wishlists for a while, but it’s become more important over the last year or so, as the number of VST synths for Linux has increased. The big drawcards are the commercial synths — Pianoteq, discoDSP Discovery, and the various Loomer plugins, for instance — but more open-source VSTs are appearing now too, such as the TAL synths, ported from Windows by KXStudio developer falkTX in his new DISTRHO project.

The new features use the unofficial Vestige VST headers, which means that Ardour avoids the need for users to download the official Steinberg VST SDK and build Ardour themselves. Having said that, the new VST support is a build-time option that’s disabled by default, but I’m hoping that it will be enabled by default, and available in the official binary builds of Ardour, before the final 3.0 release. 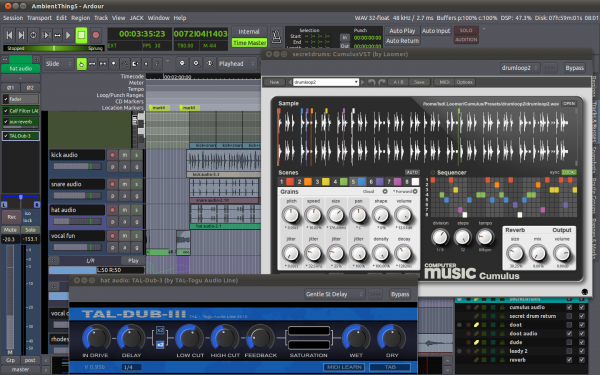 As handy as this is, there has been some discussion about whether or not native VST support is a good thing. VST isn’t a particularly elegant plugin system, and given Steinberg’s licensing restrictions, it’s always going to be harder for the developers of hosts like Ardour to deal VST with than other plugin formats, such as LV2. I would hate to see this VST support discourage developers from working with LV2.

Realistically, though, it’s hard to expect commercial plugin developers to embrace LV2, on top of the effort already required to bring their plugins across to Linux. Indeed, now that Ardour has joined Qtractor and Renoise in supporting VST plugins, the size of their combined user bases might encourage more plugin developers to offer Linux support.

I hope we’ll see more ports of open-source Windows VST plugins too, but for anyone developing a new open-source synth plugin, or working on a plugin version of an existing standalone synth, LV2 makes much more sense. Regardless of how open-source they may be, VSTs that rely on Steinberg’s headers will never be allowed in to distributions. With David Robillard’s new LV2 stack, which is already in use in both Ardour and Qtractor, LV2 is a fast, reliable, and highly capable standard, and its use will only increase, regardless of what happens with native VST support.