As I mentioned previously, I’ve been playing with Ubuntu on my 2011 Macbook Air, and I’m happy to report that it’s now much more usable than when I first installed it. There’s a kernel module hack that fixes the display issues, allowing the Intel driver to run at the panel’s full 1440×900.

Having the Intel driver running instead of the fbdev driver means that OpenGL and visual effects (and Unity, if you’re in to that sort of thing) work, as does brightness adjustment, and I suspect it’s the reason that suspend and resume now work, too. Patching the kernel manually would be a pain, but the (updated) setup script from the Ubuntu forums now takes care of this for you, along with the keyboard and trackpad driver patches. 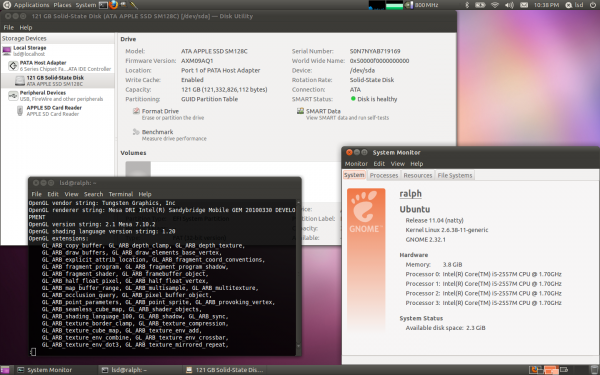 Ubuntu 11.04 on the Macbook Air, with all the important stuff working

I also had a chance to test the Ubuntu 11.10 beta. I haven’t tested it with the video fix above (though it is supposed to work), but I did notice that the my 5Ghz 802.11n network worked with it, so it seems like the 5Ghz issues I’m having with 11.04 have been fixed.

All of the important stuff is working, then, at least for my needs. There are some minor keyboard niggles — I haven’t been able to adjust the keyboard backlight brightness, and the volume keys are incorrectly mapped — but the biggest issue is with the trackpad. It works, including two-finger scrolling and two- and three-finger taps and clicks, but it doesn’t feel quite right, particularly when scrolling.

It seems like a minor thing, but the trackpad is central to the user experience, and when basics like button presses and scrolling rely to a degree on gesture recognition, it matters a lot that they’re detected reliably and respond appropriately. The multitouch driver is under active development, though, so I have no doubt it’ll improve.

I really enjoying benchmarking this thing, just to see how much power has been crammed in to it. Compiling Ardour 3 from SVN seemed like a good test of overall system performance: it managed it in 14 minutes and 50 seconds, just under two minutes faster than my 3Ghz Core 2 Duo desktop. It’s definitely no slouch!