I have a new track in the works, and as an exercise, I’m sequencing it all within Ardour 3. The alphas of Ardour 3 have been great on audio-only projects, but for MIDI work they’ve been highly unstable until quite recently. Each alpha just gets better, though, and while it still crashes, and has some odd behaviour, alpha 8 has behaved well enough that I’ve been able to make some solid progress.

I think it’ll still be a while before I’ll be recommending Ardour 3 for MIDI-intensive work (it may not reach that point until after the 3.0 release, even), but it’s developing well, and I figure that actually using it and reporting any problems I find is the best way I can help make it the brilliant all-round DAW I think we’re all hope it will become. 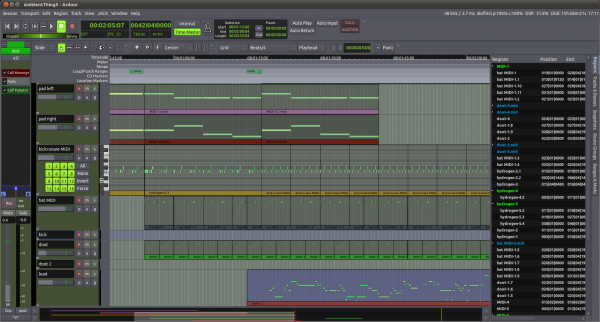 An Ardour project with only MIDI tracks? Madness!

I’m using a combination of synths — my Blofeld and Hydrogen, using a2jmidid to bridge Ardour’s JACK MIDI to ALSA MIDI, and some LV2 synth plugins within Ardour — and they’ve all worked well so far. The reliance on LV2 for synth plugins is an issue I’ve mentioned before, and there are still only a handful of LV2 synths, but I’ve had good fun with Calf Monosynth (the git version adds LFOs and a new UI), and with Jeremy Salwen’s ports of the “SO” synths. The SO-KL5 “piano” synth sounds really nice in a way that’s not entirely dissimilar to an electric piano.

Automation, especially on MIDI CC messages, is quite sketchy at the moment (it should be addressed in alpha 9), but I did get it working for plugin parameters; in this case, the filter cutoff of a Calf Monosynth instance. This worked really well, giving me some lovely, smooth filter sweeps. If alpha 9 lets me automate parameters on my Blofeld just as easily, I’ll be a very happy man.

Qtractor is adding automation in its next release, too, so one way or another, it looks like we’ll definitely have some solid synth automation features under Linux this year.