It was about two years ago that I released my first new track in ages, and since then I’ve surprised myself a bit by sticking with it, producing new tracks every few months. There’s enough there for an album now, so I’ve decided to bundle my tracks together and set them up as an album on Bandcamp:

It’s a free download, and you can grab it in whatever format you like, all tagged up and ready to go! Even though it’s a bit of an odd mix of tracks, it feels great to have an album’s worth of tracks to my name. With any luck, my next album’s worth will be a little more thematically consistent.

I’ve released the updated version of my new track, titled “move along” — it’s the same song (no extra parts were recorded), but I’ve re-balanced all of the elements based on feedback I received, bringing out more of the drums and vocals, and pushing the piano back so that it doesn’t dominate. I’ve replaced the old version with this one, so if you stream it from the original post you’ll get the new version, but I’ve also included it again here. You can also get it from my Bandcamp.

My good friend Switchbreak produced another game recently — Waterfall Rescue, a Flash game with a great single-button control mechanic that’s a lot of fun to play. He wrote the game in 48 hours for Ludum Dare 20, which is a solo competition, but he spent some time after that working on the graphics, so I whipped up a quick theme tune for it, too.

You really should check out the game, but if you just want to check out my music, here it is: I’m feeling lazy, so I’m including this as an embedded player from my Bandcamp page instead of uploading it again and using my usual HTML5 player.

Thanks to everyone that listened to my new track, and especially those of you that gave me your thoughts on it — they’ve all been greatly appreciated. I wasn’t sure how such a change of direction would come together, but overall the reaction has been very positive, which is just awesome.

One comment I received from fellow podcaster Mike Holstein before releasing the track was that the vocal was too soft against the piano, but I chose to ignore it — I’m still not really confident in my voice, so I didn’t really have the guts to bring it to the fore as I should have. A number of other people on the linux-audio-user list have since made the same comment though, and after listening back I have to say that I now agree with them 100%. 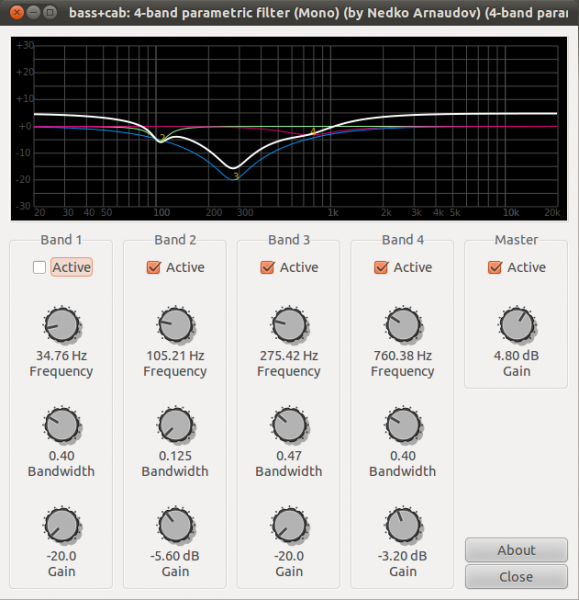 An aggressive EQ curve to tame resonances in the bass part, courtesy of the "lv2fil" LV2 plugin

I’ve decided to remix the track from scratch: I took a snapshot of the track in Ardour, and then zeroed all the levels, deleted all the plugins, and started a new mix from scratch. There were other parts of the mix I wasn’t happy with — the bass had some nasty resonances, and the drums were a bit inconsistent — but I’ve been about to smooth out some of those problems using EQ (the lv2fil four-band parametric EQ), compression (using the Invada Studio compressor, which works well at low attack values for taming transients), and level automation. The upshot of this is that I can push the piano further back in the mix and bring out more of the drums and vocals.

I’m still playing with the EQ and levels on the vocals and the piano, to make sure they sit together well with each other and with the other elements, but I think it’s already sounding more polished and better balanced. I’m looking forward to having this one finished (again!).