It’s been a while since I’ve blogged much — the last few months have been quite a busy time for me, as I’ve been transitioning jobs. Things are returning to normal now, though, as I settle in to my new full-time role at a sysadmin/developer at Bandcamp, which is a totally awesome job with totally awesome people. That’s all beside the point, though, because I’m really here to talk about nanoloop, a great little sequencer that’s just been released for Android.

nanoloop started life on the original Gameboy, and its heritage still shines through today in its simple pattern-based design, chiptune-style synth sounds, and its clean, minimal interface. Once you find your way around, it’s quite easy to enter in patterns, create some sounds, and then string the patterns together in to simple tracks. The built-in synth is very simple, and while its sounds all sound like the kind of thing you’d expect to hear from a 8-bit console, there’s a surprising amount of variety available.

If the built-in synth doesn’t cut it for you, nanoloop also has a built-in sampler, with a few tracker-style controls for looping and controlling the start position. You can record sounds with your phone’s mic, or load samples from the SD card, which is very handy if you have sample collections from the likes of Electrum installed. 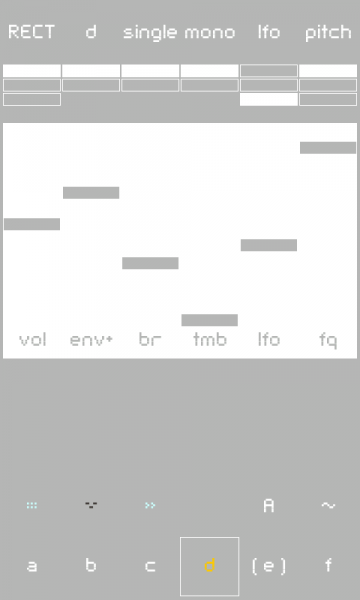 the built-in chip-tune-style synth is simple but effective

nanoloop’s definitely limited, but its limitations are all in the name of simplicity — the UI is pretty quick to learn your way around, and it’s exceptionally clear and responsive — so you soon forget about the limitations and start having fun just messing about. It would be ideal for sketching out ideas or just random experimentation on-the-go, and if you do make something you like, you can export it to Ogg Vorbis format for posterity.

Here’s a little something I whipped up earlier: there’s not much to it, but it was great fun to make.

3 thoughts on “sketchbook: nanoloop for android”