This track has been a long time coming, but it’s finally done! It’s my first original track with lyrics; it’s about leaving my job after so many years there, though I wouldn’t read too much in to the words. It’s certainly a departure from my usual electronic stuff — this has just piano, bass, drums, and vocals — so I’m keen to hear what people think of it.

You can download or stream it below, or at Bandcamp. Some production notes are under the cut.

END_OF_DOCUMENT_TOKEN_TO_BE_REPLACED

Easter is a holiday weekend in Australia, and the extra days off gave me time to get back to the piano-driven song that I’ve been working on for some time. I’ve had the arrangement largely complete for a while, so I quickly finished the lyrics and then recorded the vocals.

Until now, this track was all MIDI in Qtractor, and I tried recording the vocals there, too, but I need a lot of takes to get a good vocal down, and Qtractor didn’t make that easy. I suspected that Ardour 3 might, though, so I started a new session, synced it to Qtractor using the JACK transport, and recorded the vocals there. 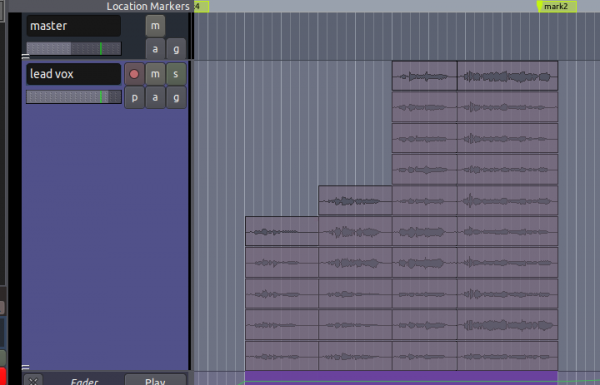 Ardour 3 can stack overlapping regions within the one track vertically, making it much easier to work with multiple takes

Ardour has long allowed you to record multiple takes in to the same track, but switching between them in Ardour 2 was time-consuming. In Ardour 3, you can switch a track to “Stacked” mode (under Layers in the track’s right-click menu), which displays the overlapping regions within the track separately, stacked vertically on top of each other. In Stacked mode, you can see clearly what’s in each region (at least, once you’ve expanded the height of the track enough!), and you can rearrange them by clicking and dragging.

It’s also easy to select multiple stacked regions and run the same edit operation on them, such as splitting them at the playhead. It took very little time to split my takes in to individual phrases, and then rearrange and audition them to find the best takes for each part of the vocal.

A more fundamental change in Ardour 3 is the new connection manager interface, which is a massive improvement on the old UI for managing connections to tracks, buses, and inserts/sends. It’s intimidating at first, but it’s really quite simple to use: it’s a matrix, with outputs running top-to-bottom on the left, and inputs running left-to-right on the bottom. For each combination of input and output, there’s a box on the grid, and clicking in those boxes creates or deletes a routing between that input and that output.

In specific parts of the UI, you’ll just see subsets of this; for instance, if you open the connections for a specific track, you’ll see the potential outputs on the left, but just the track’s inputs down the bottom. However, there’s also a master connection manager (well, two really — one for audio, and one for MIDI, both available from the Window menu), which lets you make connections to multiple tracks or buses very quickly. 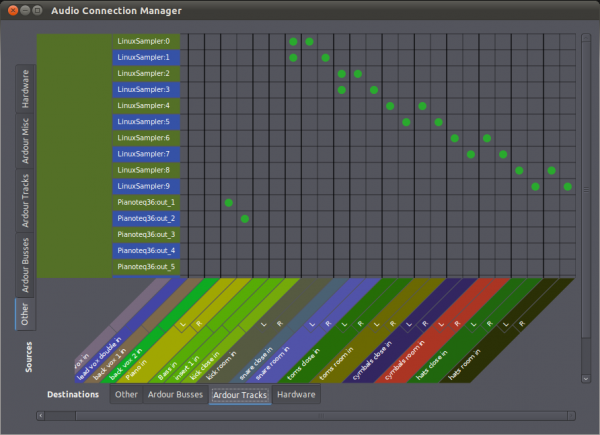 The connection manager can be intimidating at first, but it's super-quick to use

After I finished recording my vocals, I decided to record audio tracks from my MIDI instruments in to Ardour so I could work with just audio for the final mix. For the drums, I used LinuxSampler (discussed a little here), with five separate copies of Analogue Drums’ RockStock kit loaded (one each for kick, snare, toms, hats, and cymbals), each routed to its own pair of JACK outputs. In Ardour 2, it would’ve taken ages to connect those LinuxSampler outputs to my track inputs, but with the master connection manager in Ardour 3, it took just 10 clicks and about as many seconds. 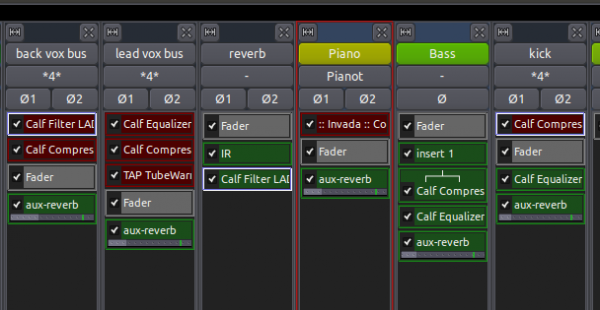 I’ve mentioned it before, but the aux bussing in Ardour 3 is great. Once I’d recorded all my instruments in to Ardour, I set up a reverb bus (a convolution reverb using the excellent IR plugin), and added sends from some of my tracks. Not only are they easier to add, but you can see and adjust the send levels straight from the mixer.

While I ran in to some problems with MIDI in Ardour 3 last week, working with just audio this weekend has been rock-solid. A lot of bug fixes have gone in to Subversion since the last alpha release, so I’m hoping we’ll see a beta release soon.

Ardour 3 is now in alpha, and I’ve been poking at it for a few days now; in fact, you may have noticed some bits of Ardour 3’s GUI in the screenshot from my last post. It’s still quite crashy, as you’d perhaps expect from an alpha, but that seems to improve with each new release. In fact, going back to Ardour 2 already feels uncomfortable, because the Ardour 3 interface just feels nicer to work with, even before you consider all the new features.

The MIDI functionality takes a little getting used to, but once you’ve learned a few keyboard shortcuts you can quickly jump between working with MIDI and audio at the region level, and working with the individual notes within regions. I still think I’d be more comfortable if the piano roll was in a separate window, but once you’ve resized your MIDI track and adjusted the range of notes it displays to match your needs, it’s really quite easy to draw in notes with the mouse.

Being able to manipulate notes easily with the keyboard is great, too; once you’ve learned the appropriate shortcuts, you can move between notes and edit their pitch, duration, and velocity using the keyboard. Editing velocity in general is a bit strange, though, since there’s no velocity ruler — velocities are represented just by note colour, though hovering the mouse over a note will tell you its velocity value.

I did run in to a few problems beyond simple crashes, but I’m still pretty confident that Ardour 3 will be pretty solid by the time of its final release. I’m not sure it’ll eclipse other sequencers, like Qtractor, in that first final release, at least not in some ways (I do like having a velocity ruler, for instance). That’s just fine, though — Ardour 3 works just as well with external sequencers as Ardour 2 ever did, and its features extend far beyond simply adding MIDI.

I love that glitchy modern percussion sound that you hear in a lot of electronic music these days (BT comes to mind, but there are plenty of examples), but I’ve never had much luck creating those sorts of sounds myself. I did give one track, tiny droplets, a bit of a glitchy feel by distorting the crap out of some Hydrogen drums (a 909 kit, no less), but that wasn’t quite the sound I was looking for.

The solution had been staring me in the face, but it almost seemed too simple to work, or too cumbersome to be practical: instead of using some kind of drum instrument, just load drum samples in to Ardour directly, and copy and paste the individual drum hits in to place. It sounds like fiddly work, but it’s really not that bad — with Ardour set up to snap regions to its grid, and with the grid set appropriately, it was really quite easy to lay down a simple kick/snare beat, and it was just as easy to copy and paste that beat out over multiple bars.

From there, glitching it up takes a bit more effort, but with such fine control over things you have a lot of scope for creative effects. I tried two main techniques — trimming down individual hits and repeating them very quickly (which required more copying and pasting), and reversing individual hits (using the “Reverse” option from the region’s right-click menu) so that they played backwards, often combined with some fast repetition.

Individual drum hits, sliced and glitched up in Ardour

For the hats, I didn’t want to lay down the individual beats in Ardour, so I created a hat loop in Hydrogen and imported that. In most bars I just let it play as-is, but in some I add some variety by splitting the loop in to beat-length chunks and then manipulating those chunks. I shuffled the chunks around a bit, reversed some of them, repeated some of them, and also shrunk some of them to half their original length (using the Stretch/Shrink Regions tool) and repeated them.

There are tools that can help with this kind of beat-slicing if you don’t want to do it by hand, including Smasher, which works offline but has a lot of different effects on offer, and Tranches, which can slice beats under live MIDI control, but I’ve had trouble fitting these in to my workflow. There’s also Sequent, a commercial plug-in and stand-alone tool, but it’s not super-cheap (though for what it does, I think the price is entirely reasonable). I’m really happy with the results I achieved entirely within Ardour, though, and now that I know how to get these sounds, I think I’ll be making them a lot more often.

It’s been a while since I’ve blogged much — the last few months have been quite a busy time for me, as I’ve been transitioning jobs. Things are returning to normal now, though, as I settle in to my new full-time role at a sysadmin/developer at Bandcamp, which is a totally awesome job with totally awesome people. That’s all beside the point, though, because I’m really here to talk about nanoloop, a great little sequencer that’s just been released for Android.
END_OF_DOCUMENT_TOKEN_TO_BE_REPLACED