I’ve mentioned Pianoteq in the past, and I’ve played with several demo versions over the years, but now I’ve finally taken the plunge and bought a copy. Pianoteq boasts great Linux support, and its new entry-level version — Pianoteq PLAY — is just 99€, but why is it worth buying when I could use (and indeed, certainly have used) the Salamander Grand Piano for free?

The Salamander exemplifies the traditional approach to making a quality virtual piano: take a real piano, and sample the hell out of it. LinuxSampler works beautifully with these massive sample libraries, and if the Yamaha C5 used in the Salamander doesn’t suit your style, there are affordable commercial pianos (and other instruments) in LinuxSampler-compatible GigaStudio format from the likes of SampleTekk. 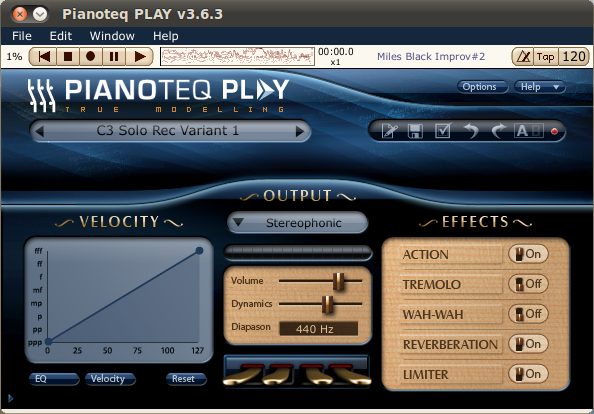 The entry-level Pianoteq PLAY has limited configurability, but the same great sound

Pianoteq, however, takes a very different approach. Instead of using samples, it synthesises the sound, using a software model of the behaviour of a real piano. I’m not sure if it really sounds better than the Salamander, but it definitely feels better — it’s much more lively and dynamic, handling everything from soft and delicate to harsh and biting very convincingly. It really shines when you put the pedal down, thanks to the subtle sympathetic resonances that ring and shimmer in nearby strings each time you hit a note.

I’ve talked before about how a great synth can do more than just make sound — it can inspire you to play and create. Perhaps that’s the real difference between a sampled piano and Pianoteq: they both sound like a piano, but only Pianoteq feels inspirational to play. In other words, while the Salamander may be very good, Pianoteq is truly great.

Beyond the touchy-feely stuff, Pianoteq has some substantial technical advantages. With no need for gigabytes of samples, its installed size is tiny (around 20MB), so it loads quickly, uses little RAM, and is inherently laptop-friendly.

Within that 20MB, there are three grand pianos, each based on creating a particular sound and feel rather than copying a specific model. There’s the classical C3 (my favourite so far), the modern jazz/rock M3, and the general-purpose K1. Even greater variety is available in add-ons, both free (recreations of classic historic pianos, and a Yamaha CP80 electro-acoustic) and paid (electric piano, vibes, and “rock piano” — the same Yamaha C5 as the Salamander).

The other advantage of the modeled approach is configurability. While the entry-level Pianoteq PLAY limits you to a set of presets, the Standard edition lets you edit piano parameters (like body length and hammer hardness) and microphone placement. The high-end PRO edition allows per-note editing of piano parameters, which lets you create all sorts of piano-like instruments that would be impossible to build for real. Thankfully, you can buy in at the low-end and upgrade in future if needed.

It’s worth mentioning that the Linux port of Pianoteq is really quite good — if it wasn’t, I wouldn’t be writing this. As you’d hope, it supports JACK for audio — though it also supports ALSA, if you want to use it stand-alone — and it uses ALSA for MIDI, so it’s easy to hook in to your average Linux software setup. There are both 32-bit and 64-bit versions, and both have worked perfectly for me on my laptop and desktop systems. One thing lacking right now is plugin support; It’d be great to be able to load Pianoteq in to Qtractor as a DSSI plugin, or even a native VSTi, but it’s not a major issue.

One aspect worth mentioning is the copy protection, simply because it’s not something I’m accustomed to dealing with. Pianoteq uses a combination of a product key and a one-time online activation; it’s all quite simple, and you’re allowed to have three separate PCs activated at any time. You can remove those registrations through the Pianoteq website if required.

If you want a very playable virtual piano — and don’t have a problem with closed-source software — Pianoteq is definitely worth a try. The demo gives you time-limited access to the build-in grands, as well as the paid add-ons, so you can see if it’s for you without worrying about the cost.

One thought on “playing with pianoteq play”